One thing to know about us at JACOPERA, is that it’s not just about us. In fact, it’s about being collaborative. Last Friday evening, the three of us girls had the great pleasure to attend a gathering at a beautiful New York City apartment in the UN World Tower. We shared a salon, or as we like to say salon-soirée, stage with a professional flutist who played on both a Baroque and modern flute, a Broadway baritone premiering the most precious rendition of a song from Aladdin, another Opera Diva who sang a classy mash-up of Carmen and Fever, and a tenor who not only dressed the part in a snappy tux, but made us long for much more Bel Canto. We had the utmost respect for our pianists collaborating with all of the artists for the first time and sight-reading our music. We even had a stunning performance of a Chopin piece on the decades-old baby grand that left all of us speechless. It was that acute focus on the music that made the rest of the world fall away at that moment and made our albeit small but influential audience further interested.

While looking around the room in awe of those that had come together that night, I thought about the components that had brought us there. It was of course our love of music, classical music, but it was actually through technology that we connected. I had met with Bernhard Kerres, the founder of Hello Stage, a growing online community of classical artists and now features a booking tool for producers(!), for coffee only a few days before in San Francisco. He invited us to attend his casual classical jam session in New York. Weeks prior he had put together a mini-convention on the state of Classical Music and technology at Runway, located in the Twitter building, rightly named ‘Classical Goes Tech‘. Being that I grew up in the Silicon Valley, I was intrigued and found myself amongst the who’s-who in Classical Music. I also found myself so very exited about this new platform solely for classical musicians, it’s quickly turning into the ‘LinkedIn of the Classical world’ (Read: ISPA’s article here), and it is needed.

In an era or country where, it’s all about the numbers at the end of the quarter, or about the paycheck at the end of the day, or about how many seats are filled in a concert hall, I say, there has to be a better way. This is a time when Classical music is struggling for new listeners, a time when organizations across the world are closing their doors or cutting their performances for their seasons. I think it is time that we accept this fact, and look for ways to fix it. It’s not the end of the world, or the end of opera, it’s an opportunity for growth and for change. There are countless examples, historically speaking, of premieres and openings that flopped, then 50 years later became huge ‘hits’ and are now being played in opera houses around the world today. What the opera world needs is to go inward and attract by opening up, together.

We three girls are still out there auditioning and singing every chance we can, because it’s about sharing our love for this art and performing in live operas that we really care about. It’s about exploring the beauty of the voice and this music that the composer wrote. It’s about singing with complete care and understanding of the story, because believe me if you feel it then the audience will too. Music is a form of energy, and it is contagious. After a night like we had last week, we felt so invigorated and excited for our upcoming performance in January, that we know we are doing the right thing. Playing music with others makes you play nice in real life. If that is not a reason to teach your children music or keep music education in our schools, I’ll give one other reason and a bonus, it makes you dream big dreams and pull in crazy cool connections that would have not otherwise been made, much like in technology.  For the Classical world to survive and ‘go tech’ by putting content out there ‘digitally,’ we have to remember that on both sides of the stage, it is first about listening to the music, secondly about connecting to the energy of the performer, and thirdly about feeling the emotions with our hearts.

New blog post about our Milan concert! -> JACOPERA.com <- #singers #opera #divas #classical #music #performer #stage #operasingers #art #artist #jacopera #europe #milano #italia #divas
Happy Independence Day! The colors we wore to our concert yesterday fit perfectly with the 4th of July (didn't plan that). We are currently in Spain, though, so we hope everyone at home in the US has a safe and happy holiday! 🇺🇸🎉
#Repost @_a_n_a_90 with @repostapp ・・・ Blowing bae some baci! 😘 Looking forward to singing your first movement of Stabat Mater on Sunday! #pergolesi #stabatmater #baroquemusic #oratorio #JACOPERAdoesItalia #vivaJACOPERA
Size Matters. #tbt to @iv0nchi coaching us through her piece Hoguera de Silencios before its world premiere at our concert this Sunday! Una serata per canto lirico July 3rd Magazzino Musica (MaMu) via Soave 3 Milano 🇮🇹
Milan, see you in a few weeks for our European debut! ✈️🇮🇹 #Repost @jenniedlegary (via @repostapp) ・・・ It's official. Score is delivered and printed. New piece by @iv0nchi "Hoguera de Silencios" with text by Blanca Varela, for two sopranos and one mezzo, to be premiered at our @jacopera_ concert in one month. We are excited!!! #supportthearts #newmusic #premier #womencomposers #onandoffstage #marketing #standingroomonly #jacoperainternationaldebut #jacoperadoesmilan #milan

Get to know us! 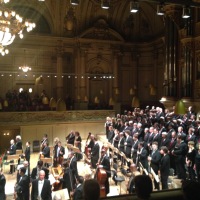